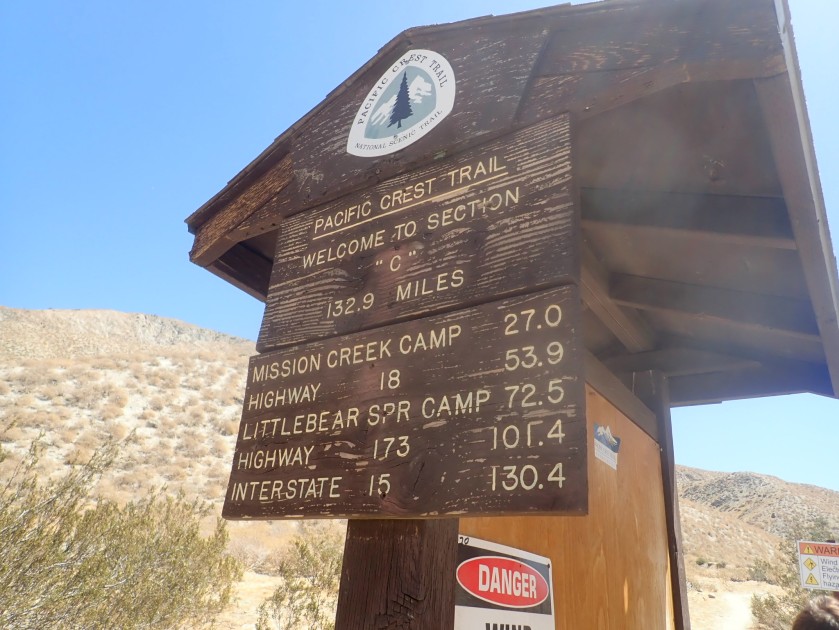 It has been a great week. Anne and I could not find the motivation to leave Cabazon as intended and ended up spending the night at the Indian Casino and Resort. We ate like pigs and returned to our overpass the following morning greeted by trail magic in the form of cold sodas and water.

We continued on into the desert climbing in the heat. It was slow moving as we were both still recovering and the sun was oppressive. I saw not only my first rattlesnake but my first three. One way to close for comfort. Anne had awoken him walking by and when I then passed him he was coiled to strike and quickly began to rattle at chest height about three feet to my left. I did not think my legs were capable of running but after a shrill girlish scream I was sprinting down the trail to safety.

We made it to Mesa Wind Farm where we napped away the hot hours of the afternoon in the shade they had set up for us hiker trash. They provided cold water, WiFi and had some high calorie foods for sale. It gave us life and we continued on to Whitewater Reserve.

When we arrived and saw the river we both had tears in our eyes. We rested for the night and took advantage of thier freezing cold wading pool which was heaven for our poor abused feet. We ran into Annette who I had not seen since my first day on trail. About 10 miles in I had caught her in that iconic “Wild” moment of realizing her pack was too heavy and not being able to get it on. I helped lift it to her back and was incredibly happy to see her over 200 miles later, still on trail and having dropped some of the excess weight.

We set off as a trio the next morning, more brutal heat, more elevation but had the luxury of a river running beside the trail for the next twenty miles. It was so nice not having to carry 5-6 liters of water at a time. I am growing to enjoy my mid day siestas during the hottest part of the day. We hiked on for two more days and prior to reaching our planned campsite were warned that Neo Nazi’s had rented out the cabins and we probably did not want to stay there. We cowboy camped a mile before our intended site planning to wake up early, continue on trail to the highway and hitch to Big Bear. Upon passing the cabins we were greeted by many Trump signs and several middle aged white men with assault rifles. I was greeted by one and when I asked what the whole thing was about he stated that they were “Supporting our president and exercising thier right to bear arms.” I found it quite funny that even after my encounter with the rattle snakes this was the least safe I had felt on the trail. I simply did not understand the purpose. Here they were in a national forest intimidating hikers and families, showing off thier guns and for what? The sake of circle jerking and stroking one another’s apparently delicate and misguided egos? I quickly continued on. I am supportive of people’s right to live as they would like but did not understand this aggressive showing. There is no practical use for assault weapons in the wild.

The next sight we saw was labeled as a “private zoo” on our maps. It broke my heart. They had lions and grizzly bears in 10×10 cages just pacing in circles. It was incredibly sad to see these beautiful creatures caged in such a seemingly inhumane way. A short while after we arrived at the highway where we were able to hitchhike first into Big Bear city and then to Big Bear Lake. Here we got another hotel room where we were able to shower off several days worth of filth, do some laundry and grab a bite to eat. Tomorrow we will pick up my resupply package and set off again back into the desert. I am excited to see what is in store up ahead. I am most excited to get to the upcoming hot springs and McDonald’s!

Member of the PCT class of 2018 IG: hikinghomo Facebook: agaygonewild View all posts by escheets